Digitalisation and measurement made it possible to modify mould inserts and allow them to be exchanged, thus avoiding downtime for this manufacturer. Article by GOM. 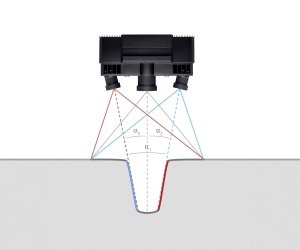 In the past, measurement service provider Lometec had ‘merely’ conducted some workpiece first-sampling for one of its customers, a well-known medium-sized plastics processor. But when an urgently needed, brand-new tool suddenly failed, the metrologists moved out on a special mission: Delivering overnight service, they digitalised the mould tools using GOM scanning systems so that precise, rapid reworking was possible. The impending default on delivery was averted.

Lometec’s customer produces, among other things, thermoplastic weather-proof housings designed for use in extreme climates. When the quantities in demand began exceeding the existing tool’s capacities, the company commissioned construction of a second, identical tool—and that’s where the trouble began.

At first, everything was looking hunky-dory: The new tool was delivered and worked just fine, as verified by Lometec as part of first sampling of the housing. The 3D measurement service sampled 125 parts and recorded the results in the initial sample test report (ISTR). Process capability was validated and the plastics processor was able to produce with two tools at once, doubling output as desired.

But shortly after starting mass production with the second tool, it proved prone to faults: Sliders and inserts began seizing. The tool manufacturer responded promptly to the complaints and supplied spare parts—but these did not match precisely, making it impossible to simply exchange them, never mind swapping over the sliders and inserts between the two tools.

The Solution: Scan and Rework—ASAP

This gave the plastics processor the idea to have Lometec digitalise and measure the 14 affected mould inserts and sliders. The measuring data would then be used to rework the imprecise spare parts.

Lometec Managing Director Jörg Werkmeister remembers, “Our job was to compare the old inserts with the new ones and return all of the inserts to the company again as quickly as possible, so they’d be able to keep on producing with one tool at least. Having both tools measured was naturally stopping production completely.”

No sooner said than done: being specialists for rapid optical 3D measurement, Lometec was confident they had what it took. The measurement service maintains two fully climatised measuring rooms and uses measuring equipment by renowned German manufacturers, including three GOM systems for full-field digitalisation of technical mould halves.

Investing in GOM technology had been very good decision, Werkmeister goes on to say. “The measuring data the systems supply are outstanding.”

To meet the demand for promptness, two metrologists tackled the plastics processor’s job in tandem: one working with ATOS Triple Scan, the other with ATOS Core.

Before conducting the measurements, the metrologists cleaned the sliders and inserts, removing residues such as grease and the like. Next, they applied high-precision reference point markers. These ensure that the software joins the separate scanned images correctly.

No Longer Pressed For Time With Portable Measuring Devices