Vibrations are usually caused by the dynamic interaction between the cutting process and the structure of the machine tool. The source can be traced to the variation of cutting force generated between the tool and the workpiece, which strains the structure elastically.

This can cause a deflection of the tool and workpiece, altering the tool-work engagement. Any disturbances, such as a hard spot in the work material, causes a deflection which then alters the cutting force. This might lead to the initial vibration to build up with the machine oscillating in one of its natural modes of vibration.

Provided that correct conditions are applied to cutting data and inserts, vibration problems generally do not arise when machining up to four times the diameter of boring bars. However, with an overhang of more than four times the tool diameter, vibration tendencies can become more apparent.

Eliminating chatter is therefore a top concern.  In order to achieve better results, vibration dampening tools have seen increasing use.

For boring or internal turning, Iscar has developed a series of anti-vibration boring bars. These have been designed to reduce vibrations when working with a high overhang from 7xD to 10xD.

Called Whisperline, these tools contain a damping mechanism that consists of a heavy mass supported by a rubber spring element containing oil. This serves to increase the required dampening effect.

The system also has other elements which help to further reduce vibrations. The reactive damping mechanism comes into play during machining with high overhang work depths, acting as a counter to vibrations.

The anti-vibration damper effect allows for large depth of cut and high feed rates, which translates to continuous and more efficient machining.

The cutting edge can also be supplied with coolant. This reduces the cutting insert’s temperature, thus increasing its tool life, while improving chip control and evacuation at the same time. The finish and rough boring heads also come with a modular connection, allowing for an array of standard shanks and extensions to be adapted with the heads to create tools to extend over 40 cm, maintaining damping near the cutting edge and managing vibration in long-overhang setups.

The company’s SW Smart Damper can perform two roughing operations without needing to change any components due to individually adjustable insert holders. Balanced cutting for high speed operations where inserts are of the same diameter and length, and stepped cutting for high stock removal where the insert holders are simply reversed to create diameter and height offsets. 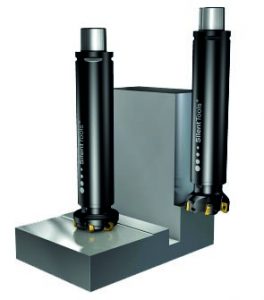 Milling adaptors from Sandvik Coromant have been developed in response for the need for greater metal removal rates and reduced vibration wherever long, slender milling tools are deployed.

“Inside the adapters is a pre-tuned passive damper—a counteracting mass that acts as a shock absorber,” explained Pal A Sollie, product and application specialist at Sandvik Coromant. The damper improves the dynamic behaviour of the tool assembly for a variety of milling applications with slender tools, from high-feed face milling, deep shoulder and side milling, pocketing, slot milling, profiling, circular ramping, or helical interpolation.

The tools also offer under-sized shanks that, where required, allow side clearance between the adapter and workpiece. This permits the use of a nominal diameter cutter—rather than an oversized cutter, which is advantageous because a lower mass cutter is more productive than a larger version on a long, slender assembly. This flexibility removes the need to compromise component designs when the use of slender milling tool assemblies is required.

The proper insert geometry also plays a large role when cutting. Choosing an insert that is strong enough to withstand the cutting forces while being suited to the component and its application is important.

It is therefore necessary to choose the most suitable insert geometry, which along with the chosen machining parameters, fulfil the requirements for good chip control.