Drone technology is becoming a valuable tool in the oil and gas industry. Oil and gas companies are opting to use drones to address their inspection needs and reduce operational costs.

Manual inspections in the oil and gas industry are expensive, time-consuming, and demand exhausting work. The oil and gas companies handle highly flammable substances which are hazardous to the personnel performing inspections. Drones for industrial use are proving to be highly beneficial in remote monitoring and assessments. Remote inspections can be performed by inspectors remotely from on-site or off-site locations without physically being present at the site.

“Drones are a flexible and cost-effective way to conduct inspections across the oil and gas industry value chain,” said Prashanthi P S, Research Analyst at Beroe Inc. “Drones can increase the safety of workers, improve the quality of investigations, and reduce the high costs associated with manual reviews. Some of the other applications include pipeline inspections, deepwater offshore location assessments, offshore vessels, rigs, underwater services, security, surveillance, monitoring, mapping, delivery of goods and survey for the potential asset.”

Manual inspections of onshore and offshore locations are generally expensive. Labor cost is high, constituting up to 30 percent of the total cost. Drones allow cost-effective and faster inspections of pipelines, deepwater offshore, and underwater equipment. Analysis of drone data enables companies to predict the health of the equipment and foresee any potential failures. In addition, drones fitted with sensors can monitor methane emissions from assets in the oil and gas companies.

Manual inspections of offshore locations require helicopters to transport personnel.  The cost of transportation for the inspection team and the cost for helicopter pilots is high.  With remote drone inspections, these costs can be eliminated. The person in charge need not travel to the site; they can perform image inspection through the video, still, infrared, and thermal images captured by the cameras fitted on drones. Inspectors can then perform advanced analysis of drone data with the help of the company’s data analysis software.

Manual inspection of flare stacks requires the process production to stop for inspection. With remote drone inspections, flares can be kept online without interrupting production. This eliminates production loss of approximately $1 million per day per flare. Remote inspections of Fluid Catalytic Cracking Units with drones are more efficient since refinery downtime would not be needed, preventing production loss of approximately $2 million per day. Scaffolding costs in the oil and gas industry amount to $50 000 to $80,000 per stack. Remote drone inspections can save more than 80 percent of scaffolding costs. Upcoming new drone technologies such as 5G and high-speed drones are expected to further boost the adoption of drones in the oil and gas industry.

“The use of drones in the oil and gas industry adds enormous value in terms of ease of operation, the safety of personnel, continued production, and reduced operational costs.” said Prashanthi P S, Research Analyst at Beroe Inc. “With the continued development of drone technology, it’s interesting to look forward to seeing new commercial drone applications and how they can be integrated with quality control, quality assurance, and maintenance processes. And when you add AI and automation to this mix, the existing benefits compound tremendously.” A new update to the International Data Corporation (IDC) Worldwide Semiannual Robotics and Drones Spending Guide forecasts that worldwide spending on robotics systems and drones will total USD115.7 billion in 2019, an increase of 17.6 percent compared to 2018. By 2022, IDC expects this spending will reach USD 210.3 billion with a compound annual growth rate (CAGR) of 20.2 percent.

Robotics spending in 2019 will be dominated by hardware purchases, with nearly two thirds of all spending going toward robotic systems, after-market robotics hardware, and system hardware. Purchases of industrial robots and service robots will deliver nearly 30 percent of the category total in 2019. Robotics-related software spending will largely go toward purchases of command and control applications and robotics-specific applications. Services spending will be spread across several segments, including systems integration, application management, and hardware deployment and support. Software spending is forecast to grow at a slightly faster rate (21.7 percent CAGR) than services or hardware spending (19.0 percent CAGR and 18.2 percent CAGR respectively).

“Industrial robotics continues to top the technology investment priorities of manufacturing organisations across all major markets surveyed by IDC in 2018,” said Dr. Jing Bing Zhang, Research Director, Worldwide Robotics. “While the looming trade war between the United States and China is likely to dampen the market growth slightly in the near term, we expect the growth trend to pick up from 2020 onward.”

“The worldwide market for commercial service robotics will continue to grow at a rate of 20% per year for the coming five years,” said John Santagate, Research Director for Commercial Service Robotics at IDC. “This growth is due to continued innovation in ease of use as well as the drive for flexible automation across industries. We expect to see growth driven by increased adoption of autonomous mobile robots and collaborative robots being deployed as a means to deliver improvements in capacity, productivity, and efficiency.”

Spending on drones will also be dominated by hardware purchases with roughly 90 percent of the category total going toward drones and after-market drone hardware. Consumer drones will account for roughly 40 percent of the category total in 2019 with service drones delivering another 18 percent. Similar to robotics systems, drone software spending will primarily go to command and control applications and drone-specific applications. Services spending will be led by education and training and will see the fastest growth (35.9 percent CAGR) over the five-year forecast, followed by software (33.9 percent CAGR) and hardware (301 percent CAGR).

Consumer spending on drones will total USD 5.1 billion in 2019, accounting for a little over 40 percent of the worldwide total. Industry spending on drones in 2019 will be led by utilities (USD 1.4 billion), construction (USD 1.05 billion) and discrete manufacturing (USD 913 million). The industries that will experience the fastest growth in drone spending over the five-year forecast period will be federal/central government (56.0 percent CAGR), education (51.0 percent CAGR), and retail (42.01 percent CAGR). By 2022, IDC expects the resource industry to move ahead of both construction and discrete manufacturing to become the second largest industry for drone spending.

“The market is working to simplify the use and integration of drones with efforts ranging from enabling new drone applications through improved technological capabilities to understanding the regulatory implications of drones and the viability of these applications. Drones are developing new skills, coupling 3D mapping and fully autonomous navigation capabilities with rapid improvements in battery performance and air-traffic management systems. Drone adopters continue to search for a safe, cost-efficient, and repeatable drone solution that can be easily implemented in a variety of situations and use cases,” said Stacey Soohoo, Research Manager, Customer Insights & Analysis at IDC. 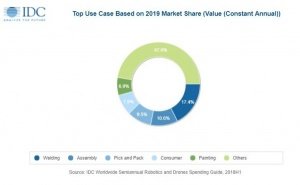 The Worldwide Semiannual Robotics and Drones Spending Guide quantifies the robotics and drone opportunities from a region, industry, use case, and technology perspective. Spending data is available for more than 60 use cases across 20 industries in nine regions. Data is also available for 18 robotics systems technologies and 16 drone systems technologies. Unlike any other research in the industry, the detailed segmentation and timely, global data is designed to help suppliers targeting the market to identify market opportunities and execute an effective strategy. Rolls-Royce and Intel are intending to collaborate on designs for sophisticated intelligent shipping systems that will make commercial shipping safer.

This will advance smart, connected and data-centric systems for ship owners, operators, cargo owners and ports, bringing together the expertise in advanced ship technology from Rolls-Royce with components and systems engineering from Intel. With a focus on safety, new ships will have systems with the same technology found in smart cities, autonomous cars and drones.

Kevin Daffey, Rolls-Royce, Director, Engineering & Technology and Ship Intelligence said: “We’re delighted to sign this agreement with Intel, and look forward to working together on developing exciting new technologies and products, which will play a big part in enabling the safe operation of autonomous ships. This collaboration can help us to support ship owners in the automation of their navigation and operations, reducing the opportunity for human error and allowing crews to focus on more valuable tasks.

“Simply said, this project would not be possible without the leading-edge technology Intel brings to the table. Together, we’ll blend the best of the best, Intel and Rolls-Royce to change the world of shipping.”

Adrian Criddle, General Manager and SVP of Intel UK said: “Rolls-Royce is a key driver of innovation in the shipping industry we are proud to be working with them on smart, connected and data-centric systems that will be a foundation for safe shipping operations around the world in the future.”