Finding a compatible linear module for your application is certainly a difficult task. Lead screw, gear rack or toothed belt drive? Miniature or heavy-load axle? Motor or hand wheel? There are multiple configurations that one needs to consider before ordering and it is time-consuming.

This newly available online tool uses application data such as installation position, load, stroke length, etc to customise the product accordingly to the client’s requirements providing as well, its service life. There is also the option to further equip the module as preferred by the client with accessories such as the motor and control system. Hence, this drive technology offers a comprehensive choice at your fingertips. “By displaying and selecting only compatible products, we give the user confidence that they will get a linear module that be connected right away”, says Michael Hornung, igus GmbH’s International Product Manager for drylin.

Furthermore, there is price included in the filtering process which allows users to immediately consider the options that fit their budget. On the final page, the configuration input into the system can be stored or forwarded, parts list and technical information downloadable, and linear modules ordered with a mouse click.

Most importantly, the online tool is available without any cost to the users.” With the help of our test data from our in-house laboratory, we can make a lifetime statement for each linear module as well as the motor load in the individual application and display them online. The customer can be sure that the module will work reliably and maintenance-free in the machine and system”, says Hornung. AUDI AG is relying entirely on industrial 3D printing at its Metal 3D Printing Centre in Ingolstadt for the production of selected tool segments. Additive manufacturing (AM) with EOS technology is used for 12 segments of four tools for hot forming. Plans call for significantly more segments to be printed this way. Audi uses the tool segments produced using the EOS M 400 system in its press shop to make body panels for models including the Audi A4. The company plans to do the same for future electric vehicles.

Shifting part of its tool segment production activities from conventional manufacturing to AM is an important step, highlighting both the quality and reliability of industrial 3D printing and the design freedom advantages this production method offers. This is the latest outcome of the longstanding cooperative relationship between Audi and EOS in Ingolstadt. EOS provided support in the form of technology and know-how before and during the construction of Audi’s 3D printing centre back in 2016. Since then, experts from both companies have been making steady progress on the use of AM, and Audi has established an ideal application in the area of hot forming for series vehicles. Several hundred thousand parts have already been produced using the 3D-printed tools and installed in selected models.

“From initial qualification by EOS to internal further development and refinement of the entire process chain through to standardisation of a new production method, we are now reaping the fruits of years of development within Audi’s production organisation. Whenever conventional manufacturing methods reach their limit, we use additive manufacturing – which lets us meet quality standards and comply with production times,” said Matthias Herker, Technical Project Manager at the Audi Metal 3D Printing Center

Advantages of 3D printing for tooling

When additive manufacturing is used at the Audi Metal 3D Printing Center, the focus is on hot forming segments and high-pressure die casting tool inserts. The design department in Ingolstadt creates entire tools, which can measure as much as 5 x 3 meters. The individual additively manufactured tool segments in turn can be up to 400 mm in length and weigh as much as 120 kg. The size and complexity of the tool segments mean that construction times of up to 20 days are not uncommon, which is why the reliability and quality of the EOS M 400 3D printing system that is used are crucial success factors.

3D printing makes it possible to create highly complex cooling channels configured for the specific component within the tool segments. This provides contoured, more-even cooling, making it possible to shorten cycle times with outstanding quality – a critical point for series production of the actual vehicle component. An injection mould manufacturer—Alpha Precision—has seen a recent resurgence of toolmaking in its native Irish Republic, and the software they are using has helped them through the recession by giving them a competitive edge to work in high-end markets. Contributed by Vero Software

The manufacturer is based in Tubbercurry, Ireland, and they operate an almost full suite of VISI modules by Vero Software.

Brendan Feely, director, Alpha Precision, said: “Several years ago Ireland experienced an exodus of toolmaking contracts as work went overseas, particularly to China. At the same time, the VISI CAD/CAM software for the mould and die industry was rapidly developing and adding new features. Even companies which were not computer literate were investing in the technology to survive. The software had a huge effect on the toolmaking industry, giving us a competitive advantage to weather the storm.”

Mr Feely described his manufacturing process as skilled staff building high end mould tools with good software. “The technology promotes a more automated process, and means our staff need a different skillset nowadays, to use the software to its full potential.”

To explain fully how he felt the software acts as the glue in the complete toolmaking environment, he likens his toolroom to a football team. “We need our goalkeeper, defenders, midfielders and strikers. We have a variety of different machines doing different jobs, so our operators have different skills. The software’s applied on the back of the machining, and because there are several disciplines, such as design, milling, wire and spark eroding, the software fits naturally into its given area. The operator in that area is just trained on the one particular software module.”

Continuing the “team” analogy, Mr Feely said the toolroom is like a group of people from different countries with none of them speaking a language other than their own. “One language is design, with others including flow analysis, milling, wire eroding, spark erosion.”

The software is the common language that unites all processes, ensuring everything moves fluently through the toolroom from one discipline to another.

Operating with 12 employees, the company produces an average of around 40 tools a year, ranging in size from 100mm x 100mm x 100mm, up to 600mm x 1,000 m, mainly for the automotive, medical, packaging and electronics industry sectors.

Two of their current projects: Producing a number of high cavitation tools for one of their many medical customers; and a contract for two-shot plastic injection tools, which involves an overmould. “Although two-shot production adds another element by involving a second material and process, VISI keeps it simple and efficient.”

With the software’s programs running their high speed milling on Röder, and F3 and F5 Makino machining centres, the challenges posed by the medical industry requiring very fine micro levels, are readily overcome. “We use the 42,000 rpm spindle speed for very small detail finishing, and cut our electrodes on the Makino F3, with high definition being done on the F5. And we can also machine a cavity in just one night, that would otherwise take a week. Using VISI Machining we can quickly produce a highly polished medical part with fine detail, a milled finish, and a split line within micron accuracy,” explained Mr Feely.

The software is also capable of powering the manufacturer’s electrical discharge machining systems for spark eroding, and wire eroders. Mr Feely said parts of the tool will have been cut on each of the machines, and when it is ready for shipping it is a very fine-micron, accurately controlled finished tool for, typically, the medical or automotive industry.

Having invested in the software’s modules which include modelling, analysis, flow, mould, progress, the wire cutting and electrode systems, along with 2D milling, 3D milling and high speed milling, the software is used at every stage of their process, beginning with providing an accurate quotation for the customer.

“We use the software’s analytical tools to check the drafts and all the different features we’ll need to build into the mould, such as the core and side pieces. When the order’s been placed, we work closely with our customer’s moulders on the design concept, including flow analysis and tool layout,” explained Mr Feely.

“Once the 2D design is broken down and we have the tooling in full 3D we really begin to see the huge power of VISI, which controls everything from design, through milling to wiring in one environment. Because we’re not going across translators there’s a perfect understanding within the technology, taking it right through every stage,” added Mr Feely.

Combining the software’s Compass technology with its 2D and 3D milling capability, all milling for hard prepping and high speed finishing is handled quickly and accurately, which he said is vital to their operation. “We make a lot of one-off custom components for each mould, meaning we only run a program once. As pattern cutters we need to be very good at generating CNC code time after time, and VISI is exceptional at doing that job for us.”

Although injection mould tools forms Alpha Precision’s core business, they also provide a blow moulding and forming tool service, and have experience in specialised press tooling. But Mr Feely concluded by saying they are currently embarking on an exciting new journey, working closely with one of their major customers on injection rubber. 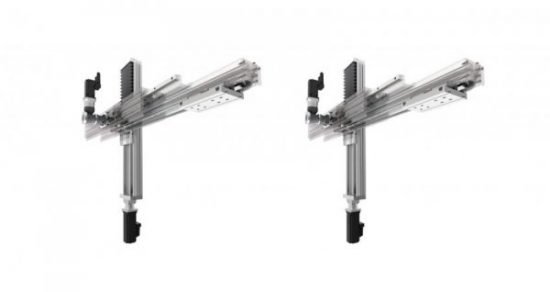 Schaeffler has developed the MTKUSE telescopic actuator for secondary axes such as in pick-and-place applications or for tool transfer. Three precision linear ball bearing and guideway assemblies are arranged on top of one another, making the possible travel distance more than twice that of the basic actuator.

The linear unit can extend in both directions. A geared servomotor is mounted on the outside of the aluminium profile and drives the actuator via a rack and pinion drive. Servomotors from other manufacturers, low backlash precision planetary gearboxes, end switches and distance measuring systems can be fitted on request.