A resident living near the Kisanfu mine showed off rocks he found there that contain cobalt. Credit Image: Reuters Photo

The U.S. and China may be on a collision course over scarce resources, the fallout of which could have a massive impact on developing countries.

Superpowers fighting over valuable goods might sound familiar in the context of oil and gas. But the new resource struggle is over the metals and minerals that will power the future from electric vehicles to clean energy technology.

That’s according to a recent New York Times investigation, which used formerly classified diplomatic cables and interviews with more than 100 people spread across three continents to paint a picture of the fight for cobalt. The investigation zeros in specifically on the southwest region of the Democratic Republic of Congo called Kisanfu, which is home to one of the world’s largest cobalt reserves. Congo as a whole is responsible for producing over 70% of the world’s cobalt supply, according to Reuters.

The metal has been among several essential raw materials needed for the production of electric car batteries — and is critical to retiring the combustion engine and weaning the world off climate-changing fossil fuels.

The quest for Congo’s cobalt, which is vital for electric vehicles and the worldwide push against climate change, are caught in an international cycle of exploitation, greed and gamesmanship. 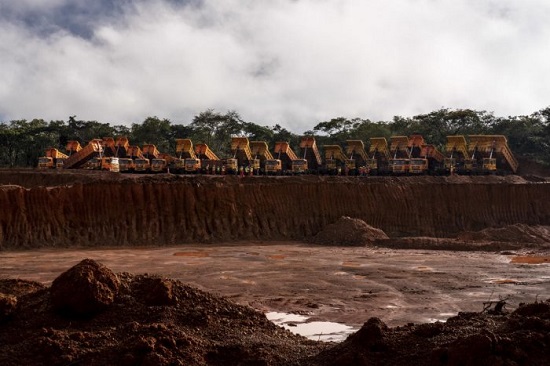 The Quest For Cobalt

It was 2016, and a deal had been struck by the Arizona-based mining giant Freeport-McMoRan to sell the site, located in Congo, which figures prominently in China’s grip on the global cobalt supply.

Tom Perriello, a top US diplomat in Africa at the time, sounded alarms in the State Department. André Kapanga, then the mine’s Congolese general manager, all but begged the American ambassador in Congo to intercede. “This is a mistake,” Kapanga recalled warning him, suggesting the Americans were squandering generations of relationship-building in Congo, the source of more than two-thirds of the world’s cobalt.

Presidents starting with Dwight Eisenhower had sent hundreds of millions of dollars in aid, including transport planes and other military equipment, to the mineral-rich nation. Richard Nixon intervened, as did the State Department under Hillary Clinton, to sustain the relationship. And Freeport-McMoRan had invested billions of its own — before it sold the mine to a Chinese company.

Not only did the Chinese purchase of the mine, known as Tenke Fungurume, go through uninterrupted during the final months of the Obama administration, but four years later, during the twilight of the Trump presidency, so did the purchase of an even more impressive cobalt reserve that Freeport-McMoRan put on the market. The buyer was the same company, China Molybdenum.

Freeport-McMoRan had been determined to sell. The company, one of the world’s largest copper mining outfits, had made a catastrophically bad bet on the oil and gas industry just before oil prices tanked and the world began to shift to renewable energy. With debt piling up, it saw no option but to unload its Congo operations. The US response, in essence, was nothing because it was a straight financial transaction. The country has no oversight of transactions by US companies abroad. The crisis, exposing significant blindspots of US leaders, was just the kind of opportunity the Chinese government excels at exploiting, according to previously unreported documents and emails and interviews with diplomats, mining executives, government officials and others in China, Congo and the US.

The news troubled executives at the mine, including Kapanga, the general manager, who had also worked as a Congolese presidential adviser and diplomat. He phoned the American ambassador, James Swan. “Tenke Fungurume is the jewel in the crown,” Kapanga said he told Swan, worried the US was inexplicably letting go of its biggest private investment in Congo. Swan declined to comment when contacted by The New York Times.

As the significance of those purchases becomes clearer, China and the United States have entered a new “Great Game” of sorts. Recently, during a visit promoting electric vehicles at a General Motors factory in Detroit, President Biden acknowledged the United States had lost some ground. “We risked losing our edge as a nation, and China and the rest of the world are catching up,” he said. “Well, we’re about to turn that around in a big, big way.” China Molybdenum, the new owner of the Kisanfu site since late last year, bought it from Freeport-McMoRan, an American mining giant with a checkered history that five years ago was one of the largest producers of cobalt in Congo — and now has left the country entirely.

In June, just six months after the sale, the Biden administration warned that China might use its growing dominance of cobalt to disrupt the American push toward electric vehicles by squeezing out U.S. manufacturers. In response, the United States is pressing for access to cobalt supplies from allies, including Australia and Canada, according to a national security official with knowledge of the matter. American automakers like Ford, General Motors and Tesla buy cobalt battery components from suppliers that depend in part on Chinese-owned mines in Congo. A Tesla longer-range vehicle requires about 10 pounds of cobalt, more than 400 times the amount in a cellphone.

Already, tensions over minerals and metals are rattling the electric vehicle market. Deadly rioting in July near a port in South Africa, where much of Congo’s cobalt is exported to China and elsewhere, caused a global jump in the metal’s prices, a surge that only worsened through the rest of the year. Last month, the mining industry’s leading forecaster said the rising cost of raw materials was likely to drive up battery costs for the first time in years, threatening to disrupt automakers’ plans to attract customers with competitively priced electric cars. Jim Farley, Ford’s chief executive, said the mineral supply crunch needed to be confronted.

“We have to solve these things,” he said at an event in September, “and we don’t have much time.” Automakers like Ford are spending billions of dollars to build their own battery plants in the United States, and are rushing to curb the need for newly mined cobalt by developing lithium iron phosphate substitutes or turning to recycling. As a result, a Ford spokeswoman said, “we do not see cobalt as a constraining issue.” Increased mining and refining of cobalt by Chinese companies has helped meet the growing demand and advanced the fight against climate change. But as more electric vehicles are produced by more automakers worldwide, the International Energy Agency expects a cobalt shortage by 2030, based on an analysis of existing mines and those under construction. Other forecasters say a shortage could hit as soon as 2025.

The Impact On Congolese Miners

Congolese officials have accused one of those mining companies, China Molybdenum, of withholding payments to the government. As cobalt production has rapidly increased since the Chinese firms took over, at least a dozen employees and contractors at a Tenke Fungurume mine complained of a “drastic decline in safety and an increase in injuries, many of which were not reported to management.” The New York Times report comes as the U.S. Senate prepares to vote on the Build Back Better bill, which would include $320 billion in expanded tax credits for renewable energy and electric vehicles and another $110 billion to improve U.S. renewable energy technology supply chains. Those investments will be crucial if the country and carmakers have any shot at meeting EV and clean energy targets outlined for the next decade. For some context, President Biden has promised to decarbonize the grid by 2035 and set a target of making half of all new U.S. car sales electric by 2030. He has used the weight of the federal government to start the EV transition, and Build Back Better would add more juice to it and the clean energy goals. But there’s a lot of work to do between now and then; a report from LMC Automotive suggested that that share is expected to be less than 4% this year.

But analysts and experts are already warning of a coming EV battery shortage that could resemble the current global semiconductor scarcity rattling supply chains. In the U.S., EV carmakers like Tesla as well as traditional brands like General Motors and Ford are gearing up to dramatically increase their cobalt and lithium demand in coming years as they ramp up EV production. That could strain already shaky supplies.

Some of those effects are already being felt according to a report released last month by Benchmark Mineral Intelligence, which found an increase in battery cell prices in tandem with an increase in raw material prices, especially for lithium. If countries continue towards their path of meeting needed climate goals, the International Energy Agency warns supplies from existing mines may only be able to meet half of lithium and cobalt requirements by 2030.

Biden, for his part, made clear his administration’s ambition to ramp up the mineral race with China during a visit at a General Motors facility last week, the Times notes. “We risked losing our edge as a nation, and China and the rest of the world are catching up,” Biden said. “Well, we’re about to turn that around in a big, big way.”

China’s goal is to control the global supply chain from the metals in the ground to the batteries themselves, no matter where the vehicles are made. The global push towards renewable energy technology appears poised to follow a familiar script, with a handful of large players fiercely competing on the global stage to extract valuable resources, likely at the expense of local geography, ecology, and communities.

References Of Content:
– The writers are journalists with NYT©2021
– The New York Times
– https://www.reuters.com/markets/commodities/cobalt-rich-congo-tries-push-into-battery-manufacturing-2021-11-24/
– https://gizmodo.com/cobalt-is-the-new-oil-1848105024
– https://www.deccanherald.com/opinion/panorama/how-the-us-lost-ground-to-china-in-contest-for-cobalt-1053907.html