Multiple factors determine the results of metal cutting processes. Among the most important and the least understood factors is the “thickness of the chips” cut by the cutting tool. Patrick de Vos, corporate technical education manager, Seco Tools, explains.

Determining and controlling chip thickness enables a manufacturer to maximise metal cutting productivity and efficiency, tailor cutting processes to specific workpiece materials and control costs. A lack of understanding of the importance of chip thickness leads many manufacturers to either overload or underutilise cutting tools, with negative effects on tool life and productivity.

With that said, there exists mathematical models that aid in understanding the functional significance of chip thickness. Chip thickness models have evolved from simple equations describing chips generated in steady-state turning operations to complex formulas that take into account numerous variables in the interrupted cutting environment of milling. 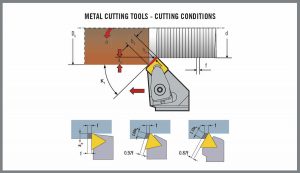 In a continuous turning operation, chip thickness does not change. In milling, however, chips continually vary in thickness as the cutting edge intermittently enters and leaves the workpiece.

When determining the average chip thickness, one has to take into account the cutter´s radial engagement with the workpiece, along with the cut ting edge geometry, cutting edge angle and feed rate. Adjusting the feed rate enables a machinist to manipulate chip thickness. 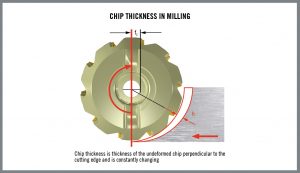 The goal is to form the chip behind the cutting edge and thereby avoid concentrating pressure and impact where they will accelerate edge wear or breakage. Adjusting the feed rate moves the location of chip formation and controls chip thickness. Increasing feed rate creates a thicker chip and decreasing feed produces chips that are thinner. The figure illustrates a situation where the average chip thickness formula is not fully effective. When side milling with radial engagement that is very small compared to the diameter of the milling cutter, the formula does not function correctly (see dotted line). And in central milling, when 50 percent or more of the cutter is engaged in the cut, the red line shows continually increasing feed rate.

That is contradictory to practical experience, where greater cutter engagement usually dictates feed rate reduction. Accordingly, the average chip thickness model is most useful when radial engagement is greater than 20 to 25 percent of the cutter diameter and smaller than 50 to 75 percent of that amount.

However, when applications require a higher degree of accuracy or when milling involves socalled difficult-to-machine materials, a model that includes additional factors is needed.

Swedish researcher Sören Hägglund developed a more global model that provides a measurement called equivalent chip thickness, which can produce tool life predictions with accuracies of plus or minus two percent. In the model shown in the figure below, the yellow arc represents the varying thicknesses of the actual chip as produced by the milling cutter. 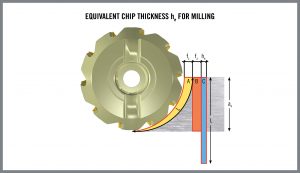 The equivalent chip thickness model also takes into account the influence of the tool´s nose radius on chip thickness. The model employs a concept originally developed for turning operations by Swedish engineer Ragnar Woxén in the early 1930s. Woxén´s formula calculates theoretical chip thickness along the tool nose, essentially straightening out the nose radius and enabling the chip area to be described with a rectangle. 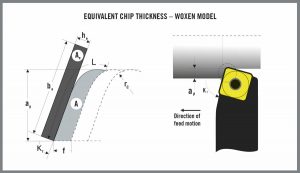 Chip thicknes s calculat ions help manufacturers avoid problems that arise when chips are thinner than a certain minimum or are thicker than a specific maximum level. When the radial engagement increases in relation to the cutter diameter, feed rate must be lowered to maintain the same chip thickness. This ensures that maximum chip thickness does not become excessive, a condition that will reduce tool life and eventually break the cutter.

On the other hand, producing chips thicker than a certain minimum is especially important when machining strain-hardening materials such as superalloys and titanium. A cutting edge producing chips that are too thin creates a work-hardened zone that is cut by subsequent cutting edges. Cutting the resulting layer of strain-hardened material accelerates tool wear and can shorten tool life by as much as a factor of three. 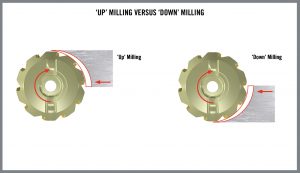 Because the complex equivalent chip thickness model includes a collection of variables, the calculations required to solve the equation consume a much greater amount of time and effort than the simplified model for average chip thickness. Manually making the calculations in a production environment is neither cost nor time efficient.

However, the availability of computer software programs for calculating machining parameters, such as those available from Seco, enables users to enter data and solve the equations in seconds. The result is optimised milling processes that boost productivity and profitability.

When milling with the conventional approach, the cutting edge rubs the workpiece before it cuts, and the thin chip absorbs heat poorly. Both conditions contribute to strain hardening of the workpiece surface and reduction of tool life. Chips fall in front of the cutter where they can be recut and degrade surface finish. In horizontal milling, upward cutting forces may lift the workpiece, necessitating use of complex workholding fixtures.

Climb milling is preferred for a number of reasons. It eliminates rubbing of the cutting edge as it enters the cut, maximising tool life and reducing heat generation. Less machine power is required, and chips fall behind the cutter to minimise recutting and improve surface finish as well as tool life. The cutting action generates downward force, which helps stabilise the workpiece and simplify fixturing. The initial thickness of the chip enables it to carry away heat and minimise strain hardening of the workpiece surface when machining materials such as superalloys, stainless steels, and titaniums.

However, the downward forces created in climb milling can cause backlash of the machine table, especially on older and/or manual milling equipment. Backlash hinders accuracy and increases the chipload on the cutter to the point that it may break. As a result, the conventional milling approach may be required in situations involving less stable machines and workpieces.

Conventional milling may also be preferable when milling castings, forgings and case-hardenend material. That is because the conventional cut begins under the hardened or rough surface of the material, while the entry of the tool into the part at full chip thickness in climb milling may cause chipping of the cutting edge as it encounters the material´s hardened zone.