Here’s a look at how Paul Horn GmbH got its start in additive manufacturing. 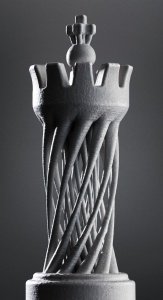 Even complicated shapes can be produced relatively easily with 3D printing.

“We were captivated by additive manufacturing right from the start, and so we kept a very close eye on advances in the area of 3D metal printing. As soon as the technology had matured to the point where we could use it to manufacture precision tools, we bought our very first system,” Matthias Rommel, Managing Director of Horn, explains. “Originally, we purchased the machine for the R&D area so that we could make special tools and prototypes. During the initial period, we found that we were constantly having discussions with our customers about 3D printing. To begin with, these were purely technical; but as time went by, they led to more and more concrete enquiries for 3D-printed components. Due to the strong interest from customers, we eventually came up with the idea of setting up an additional contract manufacturing business unit for additively manufactured components. In terms of technology, we opted for a DMG Mori LASERTEC 30 (2nd generation).”

It makes sense to use additive manufacturing if it generates a technological advantage. However, in many cases, there is no economic benefit to using additive manufacturing for a component that used to be produced by conventional methods. One example would be a turned part that can be produced relatively quickly on a Swiss-type lathe. Not only that, but additive manufacturing would also be too expensive in terms of post-processing. Other disadvantages compared to conventional production include relatively poor surface quality (Rz 30 µm), accuracies down to only ±0.1 mm, and the high cost of powder compared to bar.

As the complexity of a component begins to rise, additive manufacturing becomes more relevant. This may be driven by the need for lightweight design, special cooling channel layouts and small batches of components with highly complex geometry. Consequently, the disadvantages have to be weighed against the benefits of greater design freedom, lightweight construction, quick adaptability and speedier production for more complex parts. In the future, it therefore makes sense for this option to be included in the preliminary considerations as part of each design process.