Why CMMs Are Manufacturing’s Evolutionary Winners

The advent of new, high-performance measuring technologies could have posed an existential threat; but instead, the CMM has proven its resilience and remains key to metalworking manufacturers’ long-term strategies. Article by Sea Chia Hui, Hexagon Manufacturing Intelligence. 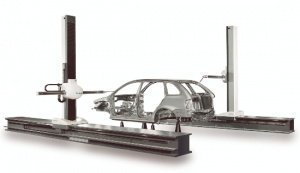 The DEA TORO CMMs can be employed as metrology stations in the development and engineering departments for supporting industrial design of complex contoured shapes, as well as flexible gages for process control in a shop environment.

For more than 40 years, the accuracy of coordinate measuring machines (CMMs) has guaranteed them a central role in metalworking companies’ quality control processes. The advent of new, high-performance measuring technologies could have posed an existential threat. But instead, the CMM has proven its resilience and remains key to metalworking manufacturers’ long-term strategies. This is because rather than replacing CMMs, new measuring technologies are complementing their strengths as quality control capabilities expand across the production cycle.

A whole gamut of machines from smartphones and cars through to PCs have benefited from rapid technology advances that include lower cost of processing, higher performance software, and faster network connectivity. CMMs are no exception. But what makes CMMs different is their unique robustness and adaptability. A sizeable number of CMMs in use today have been in operation in excess of 20 years, kept up to date by retrofitting software and sensor systems.

At the heart of the CMM’s longevity are its unparalleled accuracy and durability, combined with an ability to be upgraded for new applications and working methods. Unlike many other machines, there is no need to replace a CMM in order to gain access to new functionalities. Manufacturers simply change a CMM’s controllers, software or sensors, while keeping their principal investment intact for years.

Recent advances in measuring software, sensors and data analysis systems have played a crucial role in transforming the ease-of-use of CMMs, opening them up to new applications while increasing their measurement throughput. One of the consistent benefits of a CMM has been its ability to provide 2-D touch probe-based measurement of unparalleled accuracy, precision and repeatability. But today’s metalworking companies often want to combine the accuracy of a 2-D probe sensor with the fast 3-D data capture offered by optical sensors.

Contactless measurement, for example, makes sense for sheet metal parts where throughput and speed of measurement are of the essence, or for metal parts on which a probe would leave an undesired mark. And because laser scanners can be used to create solid models from surface profiles, they are the ideal tool for reverse engineering and rapid prototyping.

Improvements in multisensor systems mean CMMs are ideally placed to support both tactile and 3D non-contact measurement. Crucially, manufacturers are able to opt for CMM software and machine controllers that enable seamless transfers between different non-contact or tactile sensors within a single inspection program. This enables a CMM to automatically switch between different sensors to capture a full metrological report even for complex parts.

And because software systems can be programmed to instruct the CMM to automatically change over sensors, multisensor systems can be left to run untended, whether they’re using touch trigger, optical, chromatic white light, laser point, or laser line sensors. The supporting software also makes it easy to create a graphical analysis of the captured CMM measuring data and overlay it on three-dimensional CAD models to compare the real data with the nominal data. This visual representation makes anomalies easy to identify, allowing operators to take decisions quickly on the shop floor.

And since the advent of intuitive software systems and greater levels of automation have made CMMs simpler to operate accurately, their use has been opened up to a wider range of employee skill sets and levels of experience.

Dealing with the Task in Hand

Not every application will need the same software package—much will depend on parts to be inspected and the complexity of their geometry, and the extent to which manufacturers want to analyse captured data and use it to inform their design, engineering, and production processes.

Similar factors shape the choice of a CMM, which is determined by the volumes of the workpieces to be measured, the tolerances required, and the desired throughput speed. Gantry CMMs, for example, continue to be a popular choice in the automotive, shipbuilding, and aerospace industries, because they are designed to accommodate the measurement of very large sheet metal parts. And they can be adapted to meet different accuracy and productivity requirements.

Parts such as aeroblades or car powertrain gears, for example, need to attain very tight tolerances, which requires the use of high precision CMMs. In contrast, the manufacturers of car bodies or aircraft fuselage are likely to seek a CMM optimised for throughput rather than precision.

When it comes to smaller parts, manufacturers in the metalworking industry have a choice of bridge CMMs that again provide differing levels of throughput, accuracy and flexibility, depending on the application need. Manufacturers can also consider gaining productivity benefits by installing CMMs on the shop floor.

As we have seen, the CMM’s versatility is at the root of its ongoing success, offering manufacturers the possibility to closely match a CMM’s measuring capabilities with their application needs. Whether a manufacturer is looking for an entry-level CMM or the most accurate measuring machine on the market, with the right supplier they can be confident of deploying a cost-effective CMM solution that future proofs their business for years to come.